MY LOVE OF 70S FASHION, SECOND-HAND CLOTHES AND FESTIVALS

Party-girl, festival fan and gig-goer Wendy has no intention of quietening down

I think I grew up in a great time for music, fashion and film – the 70’s. My first memories of live music were nights in the pub where I grew up near St Andrews, Scotland and the local folk band would play Flower of Scotland at closing time – 10.30! We’d all be slopping lager around and singing along at the top of our voices, arms round each other’s shoulders and I’d just feel really happy. That was a feeling I’d not want to give up for the rest of my life! We’d sneak into St Andrews university to see bands – some big names came to the uni – The Incredible String Band and Deep Purple amongst them – and we were always the last on the dancefloor after the band had finished and the disco started.

The first major gig I went to in 1975 was the Rolling Stones in Glasgow in 1975, with my friend Lesley who had red hennaed hair. Mick wore white and I thought he was wildly attractive. It was so exciting. After that I was properly hooked on live music – the thrill of being in a crowd, the elation and being in the moment. Nothing beats that euphoric feeling of togetherness. It’s such a magical sense of community that you don’t get anywhere else.

The thrill of being in a crowd, the elation and being in the moment. Nothing beats that euphoric feeling of togetherness.

I was lucky enough to get a job at Jackie magazine when I was 17 and moved from my family’s home in the country to Dundee. Nights out including going to see up and coming Dundee bands in a bar on the Perth Road. I also saw Motorhead at the art college gig, and Lemmy was playing on the fruit machines in the college bar before going on stage. I was right down at the front ‘freaking out’ or whatever it was that we did back then.

Working at Jackie was my first job and an exciting time. I started off as editorial assistant, in charge of the Letters page, and I wrote a column called Week Spot which was ideas for something daft to do every day. My love of fashion and knack for coming into the office wearing things I’d customized or made myself meant I was soon asked to help the fashion and beauty editor. I also modelled for the magazine and ended up on the cover. 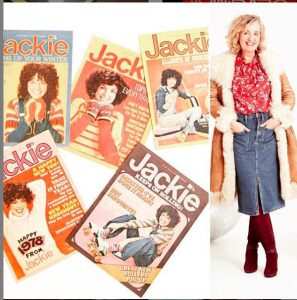 Wendy with some of her Jackie mag covers

Eventually I was promoted to fashion editor and would go to London to choose clothes, brief the fashion illustrators or shoot fashion and covers. After three years working at Jackie I moved to London, and nights out were at venues like The Rock Garden, The Roundhouse, The Hope and Anchor, The Marquee and Dingwalls, and we saw bands like Ian Dury and The Blockheads and The Stranglers.

London was bleak and grey and if you missed the last bus home you had to walk or wait for the milk train. Everything was a lot more underground then, and it was easy to go and see a band in a pub any night of the week. Nowadays you see dads or mums with kids at gigs but back then you’d never see that – there wasn’t much ‘security’ back then and you certainly wouldn’t have taken your mum and dad. It was aggressive and there was always an edge – and fights would break out.

After a short spell in London I went to South Devon technical college to do a foundation in art and design. Bands came to the 400 club in Torquay – it was 1979/80 so I saw mod and ska bands, as well as Toyah and the Rezillos.

I’d have to be first to see films as they came out – so that meant Taxi Driver, Apocalypse Now, Night Fever, Last Tango In Paris, Annie Hall, Midnight Express, Star Wars. I modelled my hair and make-up on Maria Schneider in Last Tango In Paris. Most of my clothes were customised or made by me or came from antique shops and flea markets. I was wearing petticoats and Victoriana with lace up boots and stripey socks and called this my ‘gypsy look’, and then later I got really into a version of Annie Hall’s style.

The early eighties saw the birth of style tribes – there were psychobillies, soul girls and boys, trendies, goths, skinheads, rockers, and mods. They were followed by new romantics and electro kids. The clothes and haircuts defined you – it was such a creative time. We got all our info from the NME, The Face and I-d. The way you looked wasn’t just about taste or lifestyle, it was really about who you were.

I studied fashion design at Ravensbourne College in Chislehurst and lived in New Cross. We didn’t have much money so outings to gigs up town were few and far between – but we went to see Bauhaus and The Birthday Party wearing a selection of clothes we’d raided from jumble sales or Charles Fox the theatrical costumier’s who used to have sales. Laurence Corner was also a favourite. I think I spent most of winter 1981 looking like a female version of Robin Hood with a hint of the Arabian nights.

We went to see Bauhaus and The Birthday Party wearing a selection of clothes we’d raided from jumble sales or the theatrical costumier’s.

Kensington Market and the Kings Road was where we’d hang out on Saturdays. When we got our grants we’d go straight to Vivienne Westwood’s World’s End shop and spend most of it. We were a motley crew headed out to suburbia for college every day. I listened to Bowie, Joy Division, Lou Reed, Velvet Underground, The Slits, The Pretenders and we danced to Rip Rig and Panic.

My degree show was a success and I went out to clubs to see people wearing the clothes I had designed – under my own label, Wendy Rigg. It was a dizzy hedonistic time. My collection was picked up by the press and featured in Tatler and sold in Joseph. I also made the pages of I-d, Vogue, 19, Honey, and The Observer.

After becoming Mum to Caitlin in 1986, I decided to go back into magazines. I was a single mum and it was hard to carry on as a self-employed designer. I ended up fashion director of a number of magazines and loved every minute of those jobs.

I’m lucky to live in Blackheath where there’s a music festival every year – and I can literally see the main stage from my bedroom and share the experience with my granddaughters. I love festivals because you get to see so many different acts – in fact you can’t fit them all in. At Blackheath I’ve seen Grace Jones who inspired me to take up hula hooping, Primal Scream, Massive Attack, Paloma Faith, Jamiroquai and The Libertines – all 200 metres from my doorstep.

Now at 63 I still love dressing up and going to gigs and that’s not about to change.

My taste is eclectic if nothing else. I still like small venues – big ones can be a bit soulless. The first band I went see out of lockdown was South London-based all-female ukelele band The Ukedelix at The Pelton Arms, my favourite pub in Greenwich. After having spent so long in isolation it was lovely to be back out with friends and the atmosphere was just great – everyone was so happy to be out again.

Now at 63 I still love dressing up and going to gigs and that’s not about to change. I was proud to be featured in the Sunday Telegraph talking about my passion for a good night out. Nowadays I’m a fashion stylist, sharing my love of 70s fashion in magazines like Woman & Home, Saga, and The Sunday Post in Scotland, as well as how to make recycling and sustainability work for your wardrobe via the Daily Mail.

Although there was an exciting edge to gigs in the 70s and 80s, I think it’s great that everything can be more family orientated nowadays. Next year I’m taking my granddaughter Layla to see her first gig – Billie Eilish at the O2 – and I’m so excited for her and glad I can be part of her experience. It’s so different to my first gigs, but there’s an incredible legacy that the 70’s and 80’s left.

5 THINGS I’VE LEARNT ABOUT RESTARTS
I LOVE MY OUTDOOR LIFE OF LITTLE ADVENTURES
LIFE ACCORDING TO THE INIMITABLE SUZI Q
Self-discovery Test: What Needs to Change?