THE INSOMNIA DIARIES: HOW I LEARNED TO SLEEP AGAIN

Miranda’s prior problems with sleep issues returned with a vengeance when her marriage fell apart. And took such a hold that sleep fully eluded her for years, threatening her mental health and career as a magazine editor. Here is an extract from The Insomnia Diaries.

2nd August
0 HOURS, 0 MINUTES
After two weeks without sleep, I am quivering at my desk. Normally a decisive, confident person, I now stare blankly at my team when they ask for direction. I have to keep working. Havetohaveto. If I lose that, I lose everything. Not only will I require the cash if I’m going to survive as a single mum, I am going to need the self-esteem and validation that comes from having an interesting and (kind of) important job. But I simply cannot perform. I stare at the page proofs.

Half the time, I hide in the loos, fighting off a panic attack. I have never had a panic attack before but I imagine this is one – my heart is racing, my vision has gone blurry and I can’t sit still. I can tell my staff feel baffled by and uncomfortable about this change in their boss, though they are too polite to say anything. But they are kind. Cups of tea appear magically on my desk. At some point this morning, I am sent an email by a TV company, asking me to appear on their morning show to talk about a celebrity who has endorsed breastfeeding. Normally unfazed by this sort of request, I sit there staring at my computer screen for an hour, unable to decide whether to participate. ‘Should I do this?’ I ask my new, 23-year-old graduate assistant.

29th August
0 HOURS, 0 MINUTES
Last night I took an overdose of my anti-depressant, trazodone. I didn’t want to die. I wanted to sleep and hoped there might be some hazy benefit from emptying the blister pack. There wasn’t. The world tilted alarmingly and I was violently sick, emptying some of last night’s Rioja onto our newish loft extension carpet. Frightened, I called an ambulance. I don’t recall a great deal about what happened at hospital, except that I was given an anti-emetic, plugged into a saline drip and made to feel like one of those moronic time-wasters who calls the emergency services when their cat is stuck on a roof.

I get a taxi home (alone) about three hours later. Later that day, my boss – who doesn’t know what happened and continues to be sympathetic – tells me I should probably go on sick leave. Take as long as you need, she says. Your job will be here when you are ready to come back.

30th August
0 HOURS, 0 MINUTES
I have taken to ringing friends and family members, asking them for unspecified help they are powerless to provide. (Usually along the lines of: ‘I need to sleep, please help me sleep.’) For the first couple of conversations, they are patient and sympathetic. But as my friends are usually at work, subsequent pleas become irritating. Eventually, my calls are screened.
My sister-in-law tells me I phoned her 30 times yesterday.

3rd September
0 HOURS, 0 MINUTES
I am helplessly watching my life fall apart, piece by piece. Like one of those dreams, where you are awake but somehow tied down so you can’t run. Or an operation where the anaesthetic hasn’t worked properly and you are screaming but the surgeons ignore you.
As if it were all happening to someone else.

8th September
0 HOURS, 0 MINUTES
Back to school. I am terrified. Our small primary school is a close-knit and friendly community, but it’s also a hive of gossip. I really don’t need this. I drop my kids at the school gate and aim to dash back to the car as quickly as possible. But – too late – I am faced by several of the Mummy Corps marching their offspring down the street.

My Insomnia Crash happened just as school was breaking up for the summer and I haven’t seen any of the gang since early July. Over the summer, the cheerful working mum they saw at book club has become a fidgety ghost, who suddenly finds it difficult to make eye contact. I know I don’t look great but people stop chatting when they see me. One woman actually does a double take, like they do in the movies. I give a falsely bright smile, exchange some ‘how was your summer?’s and dash back to the car.
My husband and I have retained a part-time nanny to do ‘pick up’ – a necessity on those days when I was working in town. In the mornings, we do a rota with another family.

More and more, I beg our friends to take the kids into school, even on ‘our’ days. They are very kind and oblige, though I start to feel guilty for not pulling my weight. Even something as simple as the school run is excruciating now, however much I want to be there for my children.

17th September
0 HOURS, 0 MINUTES
It’s now eight weeks since I stopped being able to sleep. I have been referred to a consultant psychiatrist at an NHS hospital. The sleeping tablets and anti-depressants prescribed by my GP haven’t worked. The time at home on sick leave has not helped – if anything, I have got worse. I have been spending a lot of the day in bed, trying to sleep or ‘reading’ (which means gazing at those black, squiggly marks presented in lines on a sheet of paper. I can’t actually put them in order and make any sense ofthem).

Sitting in the consultant’s office, I am so exhausted I can hardly say a word. The softly spoken doctor is sympathetic but, just to make sure, I beg him to prescribe me something that will ‘buy’ me some rest. I am practically hugging him round the knees. The psychiatrist listens intently to the story of my domestic upheaval and how my distress has plunged me headlong into disabling insomnia.
He agrees that I need a bit of extra help, so ‘ups’ my anti-depressant and prescribes me a tranquillizer called clonazepam – part of the benzodiazepine drug family, a.k.a. ‘benzos’.

So begins my Psychiatric Safari: an eight-year love affair with pills in colourful boxes with seductive names, like Seroquel and Lyrica. Somewhere in the recesses of my squeezed-lemon brain, I know that clonazepam is part of the same family as diazepam (a.k.a. Valium) and that these drugs have been discredited for a number of conditions for which they used to be widely prescribed. But right now, I couldn’t give a damn.

Extract from The Insomnia Diaries by Miranda Levy (Octopus). 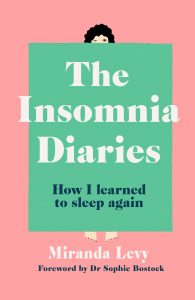 TACKLING LIFE’S CHALLENGES THROUGH WRITING NOVELS
GOING GREY IS A REBELLION
WHEN ANXIETY TOOK OVER I FOUND THE COURAGE TO ASK FOR HELP
Self-discovery Test: What Needs to Change?