When I had my third baby at 43 I felt judged by society. There was a lot of negativity about being an ‘older mum’. For a start while pregnant all I could see online about becoming a mum past 35 was risk, risk, risk. Obviously there are medical risks associated to being an older mum, but women going online are just getting a barrage of negativity. That’s hard when you’re newly pregnant.

“Pregnancy can be viewed in a negative light when you’re older, and I’m not just talking about the medical world. Much of that negativity can come from friends and family.”

When I announced my pregnancy, I got comments like “Are you sure that you want to do this again? Have you thought it through?” and “I thought your baby days were done – do you really want to have sleepless nights all over again?” and “Do you know you’re going to be 47 when your child starts school?” Of course those considerations had already entered my head. We all do mental calculations when we’re pregnant, working out what age will be at our child’s key life stages. But reinforcing those thoughts isn’t always helpful. When people said “Do you really want to be mixing with those young mums at the school gates?” I was really taken aback. It was a lot of negativity I really didn’t expect or need.

“The midwife gasped when I had to give my date of birth.”

Nobody really said “Oh congratulations” when I told them I was pregnant, or if they did there was always a caveat like “Well rather you than me” and “You must be mad”. And it’s women this comes from. Rather than championing each other and supporting older women through their pregnancies, from my experience it’s pretty much the opposite.

It’s crazy that older mums feel judged. Of course age is always a thing for women – the pressure to be young, look young and act young – society creates this pressure. So when women get pregnant when they’re older many feel like they’re not quite sure where they fit in, what’s expected of them. And when you see some of the negative reactions to Naomi Campbell becoming a mother at 50, it’s no surprise.

Being met with negativity about being an older mum can make you feel self-conscious about others’ perceptions. Some older mums have told me they preempt conversations about maternal age at playgroup or the school gates, saying “Oh, I’m the oldest mum here,” before anyone else can think or say it. It’s almost like we feel like we need to excuse our age before the conversation even starts. 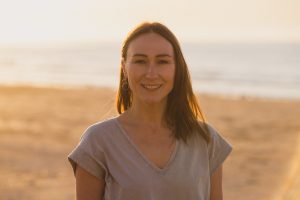 Luckily I’m in a good place and I’m not knocked by that stuff but my experiences started to make me think that I can’t be the only one who’s getting this kind of negativity. And after I’d had my son I thought women need to belong somewhere supportive if they’re older and pregnant so I set up the Facebook group, We Are Geriatric Mums. And women just sort of flocked to it. It’s a really warm and supportive space. And it’s really needed. Probably because people are just so ready to judge older mums.

“Mums in the group have told me they get mistaken for their baby’s granny when at the park.”

If a mum happens to have slightly greying hair or doesn’t look 25, people will just make the assumption that she’s the granny, not the mum. Other women have had the word ‘geriatric’ scribbled on their NHS notes. One woman had it written on the whiteboard during a medical visit.

In the medical world, a geriatric pregnancy is one that occurs anytime a woman is over the age of 35. But ‘geriatric’ brings up the connotations of old and frail which just don’t fit – at 35, 45 or even 50 we’re still healthy and strong. Why does the medical profession refer to us as geriatric when so many women give birth over 35 nowadays? We don’t always know what another woman’s circumstances might be and women have babies late for different reasons – whether that’s financial, career, relationship, bereavement or fertility related. Some women have tried for baby for years and when it finally happens they get nothing but positivity. But for other older mums the experience can be quite different.

Even being referred to as ‘at an advanced maternal age’ or an ‘older mum’ is offensive. On my hospital notes it said ‘older mum’. And yes, I realise the medical teams have to be aware of your age, because you’re a greater medical risk of complications when older – there’s a higher incidence of preeclampsia, miscarriage and complicated pregnancies. But it’s the language around it that bothers me, and the way we’re made to feel old not only by medics, but also by people as a whole.

“We don’t know about any of these women’s lives and what they’ve been through to become mums. When I announced my pregnancy some people assumed it was a mistake. But it wasn’t – we wanted another baby.”

There are many reasons why women become mums later in life. You get women who are in difficult or abusive relationships and it takes them a while to find a new partner and then conceive. Gay women may become mums later, depending on the route they take to conceive. Health issues like cancer can delay motherhood. The process of surrogacy and adoption can take years. I know a woman who’s almost 50 who had a baby via a donated egg. She wanted to have a baby more than anything else, regardless of having a partner. And who’s to say that that’s not a good way to bring a child into the world, if she’s a good mother?

Some of our members say “I just want to see my kids grow up”. Older mums do feel the pressure of being older, that fear of not being around long enough. But sometimes that choice is taken away from you whether you’ve had a baby late or not. We do the calculations, we look after our health and cross our fingers that we’ll be around long enough to see them settled, but actually, it is what it is.

One good thing is that I got great consultant care and far more of it than when I was younger. This was absolutely welcome. But beyond that I feel older mums should be treated with respect and some sensitivity, rather than made to feel singled out as different because of this antiquated terminology – negativity that we internalise.

THE SECRET LIFE OF A CHILDREN’S AUTHOR
MENOPAUSE ANGER: NO WONDER WE’RE FEELING IT
THE THANKS I OWE TO MY SINGLE PARENT DAD
Self-discovery Test: What Needs to Change?