WHY I HAD BOTOX AND WROTE ABOUT IT

How we look should be ‘enough’ yet the world judges us for looking our age.

Women don’t tend to be open about their ‘tweakments’. We’re all entitled to maintain a little mystery, but the conspiracy of silence around aesthetic treatments can lead to a sense of shame at having ‘cheated’ over our looks. And anyway aren’t we all meant to let gravity take its course and embrace the ageing process?

For me the problem was that I had a permanent case of resting bitch face.

After 18 months of pandemic lockdown, the stress and anxiety lines, sagging and shadows had seemingly settled in for good. One eyebrow drooped a little more than the other. And the constant sight of it – on Zoom calls for my freelance work as well as live video interviews for Audreyonline.co.uk – led to desperate measures. But I felt so guilty about it.

Would having a little aesthetic help make me one of those shallow types who pumps every inch of her face with fillers and ends up looking like someone else (hello Courtney Cox)? In the past I’ve written (a bit smugly, TBH) about being at peace with my ageing face, but that peace dissipated during the stress of lockdown.

Was it wrong of me to consider taking action? Asking a few friends of a similar age if they’d ever consider having Botox, many replied that they’ve been having it for years – it’s just so subtly done that I hadn’t realised. And once I knew this my whole mindset changed. I gave it a go.

My once wonky eyebrows have now been levelled up and given a slight lift, while the angry creases in between have been softened. As a result the perma-stressed look has subsided. I don’t look like someone else – just a bit less tired.

We live in a world where women are victims of ageism and struggling to remain relevant in the workplace past 50.

In August 2020, a report by Ageing Better and the Learning and Work Institute showed that a quarter of a million over-50s will never work again post-furlough. The over-50s will account for the majority of the self-employed workforce by 2024.

And self-employment means self-marketing and visibility. Our personal brand – the impression we make on the world at large – is crucial. As world-leading Aesthetic Doctor, Surgeon and Global Lecturer in beauty and wellbeing Dr Jonquille Chantrey told me: “Being in the public eye or on social media means a constant feeling of scrutiny has become the norm.” How we feel about how we look can really impact on confidence, which can make that feeling of on-screen scrutiny very uncomfortable indeed.

It’s perhaps no wonder that more than three million people in Britain are looking to undergo a cosmetic procedure this year because of the impact of the pandemic on their aesthetics.

Overuse of computers, phones and screens in lockdown is leading thousands to seek cosmetic treatments to revitalise sagging skin and wrinkles.

It’s a divisive subject and ‘tweakments’ are not for everyone. Each to their own. But they shouldn’t be a source of shame. Dr Mayoni Gooneratne, a southeast London-based aesthetic and medical surgeon says: “Many women feel guilt about having aesthetic treatments. We get these constant mixed messages and I think some women have this weird dichotomy in their heads – the sense that how they look should be ‘enough’, yet society and the world of work judges them for looking their age.”

With Botox it’s not just a physical effect but a psychological one as well. Studies have found that, for people with existing depression, their anxiety and depression scores reduced by up to 30% two weeks after having Botox. By softening their lines the way they perceived themselves got better, because they just didn’t look grumpy anymore. It can take years for someone to go from slightly curious about ‘tweakments’ to having that first aesthetic procedure – and often it takes a trigger event to make the flip. “Something like a bereavement, divorce, job loss or the menopause can be enough to compel a woman to have that first consultation,” says Dr Chantrey.

Of course there’s nothing wrong in looking whatever age we happen to be. But if a little help makes all the difference to how we feel, what’s the big deal? We should age as we see fit. As actress Sharon Horgan said: “You feel you can pretend to be young until you’re 50, but after that – what happens and how do you approach it?”. Me, I was once anti-Botox, but as detailed in the weekend Telegraph, I’ve done a 180. Why pretend? 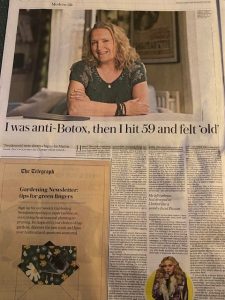 DO THE HUSTLE
MY GREAT BIG SUMMER ADVENTURE
I’VE LAUNCHED AN ONLINE FESTIVAL
Self-discovery Test: What Needs to Change?